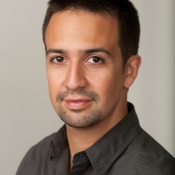 As an actor, Lin-Manuel received a 2007 Theater World Award for Outstanding Debut Performance, and the 2007 Clarence Derwent Award for Most Promising Male Performance courtesy of Actor’s Equity Foundation. Lin-Manuel also received the ASCAP Foundation’s Richard Rodgers New Horizons Award and is a National Arts Club Medal of Honor recipient.  Lin-Manuel appeared as Charley Kringas in the 2012 City Center Encores! production of Merrily We Roll Along directed by James Lapine, and can be heard on the 2012 Cast Recording released by PS Classics. In May of 2009, Lin-Manuel received the degree of Doctor of Human letters, honoris causa, from Yeshiva University, the youngest recipient of such an honor in the University’s 123-year history.

Lin-Manuel is a co-founder and member of Freestyle Love Supreme, a popular hip-hop improv group that performs regularly in New York City. The group has also toured the Edinburgh Fringe Festival, as well as the Aspen, Melbourne and Montreal Comedy Festivals.

Lin-Manuel is the co-composer (with Tom Kitt), and co-lyricist (with Amanda Greene) of Bring it On: The Musical. Bring It On has toured the United States and Canada, and will be opening a limited engagement Broadway run on August 1, 2012.

Lin-Manuel has contributed new songs to the revival of Stephen Schwartz’ Working and worked with Arthur Laurents and Stephen Sondheim on Spanish translations for the 2009 Broadway Revival of West Side Story He performed for President Obama and the First Family at the White House during Its first-ever Poetry Jam. He previewed his upcoming work, The Hamilton Mixtape, at Lincoln Center Theater’s 2012 American Songbook Series. His TV and film credits include The Electric Company, Sesame Street, The Sopranos, House, Modern Family, The Sex and the City Movie, The Odd Life of Timothy Green and NBC’s upcoming primetime drama, Do No Harm. He lives in New York.