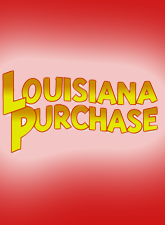 The plot machinations of this 1940 hit musical could have been ripped from today’s headlines. Set in New Orleans, the musical lampoons Huey Long and his stronghold on Louisiana politics. When Senator Loganberry arrives in the Big Easy to investigate the dubious doings at the Louisiana Purchasing Company, it isn’t long before he’s set up for plenty of scandal himself. In his review of the recent Carnegie Hall concert – the first time the musical had been seen or heard since its original Broadway run – New York Times critic Lawrence Van Gelder posited, ‘Does the South still produce corrupt Democratic politicians and businessmen? Are there still Republican senators eager to expose them to further their own Presidential ambitions? Is sex still a weapon in these wars?’ LOUISIANA PURCHASE answers these questions with a gleeful wink of the eye and a score full of Berlin magic!