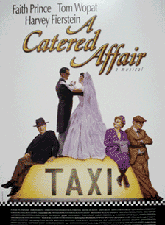 A CATERED AFFAIR tells the story of a Bronx mother’s efforts to give her only daughter the elaborate wedding she never had – and the bride never asked for. In this funny, poignant and oh, so human show of love and disaffection, Harvey Fierstein’s book and John Bucchino’s score explore both our need for love and true meaning of family. The Broadway production received 12 Drama Desk Award nominations, the most of any show of the 2007-2008 season, and was chosen as Best Musical by the New York Drama League.