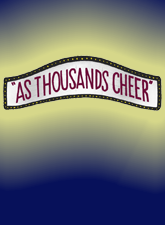 It was the Depression era version of SATURDAY NIGHT LIVE and THE DAILY SHOW. Moss Hart’s sketches were sharp, witty and hilarious and Irving Berlin’s songs ranged from wry to satiric to poignant. Their inspiration? The newspaper headlines of the day, from affairs to society photos and advice to the lovelorn; even comic strips and the weather report were fair game! A cast that included Clifton Webb, Ethel Waters and Marilyn Miller impersonated the likes of Joan Crawford, the Hoovers, John D. Rockefeller, Mahatma Gandhi and Josephine Baker for over 400 performances beginning in September of 1933. Considered a masterpiece of that specialized genre known as the topical revue, AS THOUSANDS CHEER inspired some of Harts best solo work as a comedy writer and afforded Berlin the opportunity to pen some of the greatest musical gems.

ENSEMBLE
Singing-dancing chorus as large as desired featuring The Ladies and Gentlemen of the Chorus.

COMMENTS
The original 1933 production employed a cast that numbered nearly 50 while the 1998 revival used a cast of only 6. The rousing success of both productions indicates that this topical revue can be produced on as large or as intimate a scale as you wish. A minimum of 6 actors is needed.