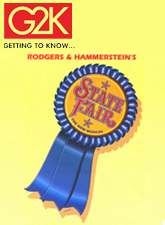 State Fair – G2K (Getting To Know)

Rodgers & Hammerstein’s only musical written directly for the screen is now a stage musical that’s had critics raving from coast to coast. Set against the colorful backdrop of an American heartland tradition, STATE FAIR travels with the Frake family as they leave behind the routine of the farm for three days of adventure at the annual Iowa State Fair. Mom and Pop have their hearts set on blue ribbons while their daughter and son find romance and heartbreak on the midway. Set to the magical strains of an Academy Award-winning score and augmented by other titles from the Rodgers and Hammerstein songbook, STATE FAIR is the kind of warm-hearted family entertainment only Rodgers & Hammerstein could deliver!

In this G2T adaptation for pre-high school students, the content has been edited to better suit younger attention spans, but all the elements that make this show a classic are still in place. You and your students will be enchanted by the timeless story and the dazzling score, while at the same time learning about theater and its production. Getting to Know…STATE FAIR is the perfect show to introduce young people through the 9th grade to the magic of live theater.