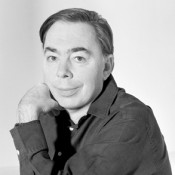 Andrew Lloyd Webber is the composer of  The Likes of Us, Joseph and the Amazing Technicolor Dreamcoat, Jesus Christ Superstar, By Jeeves, Evita, Variations and Tell Me on a Sunday later combined as Song & Dance, Cats, Starlight Express, The Phantom of the Opera, Aspects of Love, Sunset Boulevard, Whistle Down the Wind, The Beautiful Game, The Woman in White and  Love Never Dies.  He composed the film scores of Gumshoe and The Odessa File and a setting of the Latin Requiem mass.  He has composed the music for Stephen Ward which opens in London on 19 December this year.

As well as many of his own shows, his producer credits include Daisy Pulls It Off, Lend Me a Tenor, Shirley Valentine, La Bête, the ground-breaking Bollywood musical, A R Rahman’s Bombay Dreams, the London Palladium productions of The Sound of Music and  The Wizard of Oz  and the films of The Phantom of the Opera and the acclaimed Australian production of Love Never Dies.He pioneered television casting for musical theatre with the Emmy Award-winning BBC series How Do You Solve a Problem Like Maria?.His awards include seven Tonys, three Grammys including Best Contemporary Classical Composition for Requiem, seven Oliviers, a Golden Globe, an Oscar, two International Emmys, the Praemium Imperiale, the Richard Rodgers Award for Excellence in Musical Theatre, a BASCA Fellowship and the Kennedy Center Honor.

He currently owns six London theatres, including the Theatre Royal, Drury Lane and the London Palladium.His future projects include support for the breeding programme of the increasingly rare Turkish swimming cat at Van in Eastern Turkey.