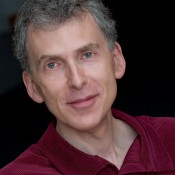 Kingsley Day is active in the Chicago area as a composer-lyricist, playwright, musical director, and performer. SUMMER STOCK MURDER, which he wrote with Philip LaZebnik, ran for 18 months at the Theatre Building (now Stage 773), won eight Joseph Jefferson Citations (including one for new work), and has since been produced at Drury Lane Oakbrook Terrace and around the country. Day and LaZebnik have also cowritten the comedy TOUR DE FARCE, which since its premiere starring Steve Carell and Hollis Resnik has been seen across the country and in Europe. Their new musical STATE STREET opens in May at Chicago’s City Lit Theater. The team was awarded two grants by the Paul and Gabriella Rosenbaum Foundation’s New Musicals Project. Day’s critically acclaimed new score for Gilbert and Sullivan’s lost operetta THESPIS has received three Chicago-area productions and has been issued on CD by the Savoyaires. Most recently he was commissioned by the Marriott Theatre in Lincolnshire to write additional lyrics for its spring production of THE PIRATES OF PENZANCE.

Day’s Chicago-area credits as pianist and musical director include OH, BOY! for City Lit, TWO FOR THE SHOW for Theatre Wit, HELLO MUDDAH, HELLO FADDUH! for the Apollo Theater, and revues of songs by Irving Berlin (PUTTIN’ ON THE RITZ), Kurt Weill (LISTEN TO MY SONG), George Gershwin (HE LOVES AND SHE LOVES), Richard Rodgers (FALLING IN LOVE WITH LOVE), and Frank Loesser (SLOW BOAT TO CHINA) for the late lamented National Jewish Theater. Recipient of three Joseph Jefferson nominations for musical direction, he also served as pianist/conductor for ALWAYS…PATSY CLINE at the Apollo and Victory Gardens Theaters and pianist/musical director for PUTTIN’ ON THE RITZ at Drury Lane Evergreen Park. As an actor/singer he has performed with Cortland (NY) Repertory Theatre as well as such Chicago-area companies as City Lit, Light Opera Works, Theatre Wit, Porchlight Music Theatre, Bailiwick, and the Savoyaires. His new reconstruction of Chopin’s posthumous Mazurka in F Minor has been issued by Hal Leonard Publishing as part of its Schirmer Performance Editions series.