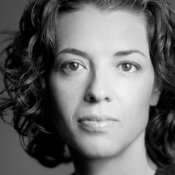 Quiara Alegría Hudes is the author of a trilogy of plays including Elliot, A Soldier’s Fugue (a 2007 Pulitzer finalist); Water by the Spoonful (winner of the 2012 Pulitzer Prize for Drama); and The Happiest Song Plays Last, which premiered at Chicago’s Goodman Theatre in April 2013 and is now playing Off-Broadway in New York. Hudes wrote the book for the Broadway musical In the Heights, which received the 2008 Tony Award for Best Musical, a Tony nomination for Best Book of a Musical, and was a 2009 Pulitzer Prize finalist. In its original Off-Broadway incarnation In the Heights received the Lucille Lortel and Outer Critics Circle Awards for Best Musical. Hudes’ honors include a United States Artists Fontanals Fellowship, the Aetna New Voices Fellowship at Hartford Stage Company, a Joyce Foundation Award, a residency at New Dramatists, and a resolution from the City of Philadelphia. Hudes sits on the Dramatists Guild Council and serves on the board of Philadelphia Young Playwrights, which produced her first play in the tenth grade. She lives in New York with her husband, daughter and son.