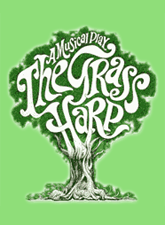 This 1971 musical has long been considered among enthusiasts as one of the lost treasures of the musical theater. Kept alive largely thanks to the extraordinary cast recording featuring an incandescent Barbara Cook, THE GRASS HARP is an intimate tale of fascinating characters carried on the wings of a ravishing score. The title refers to the wind rustling though fields of tall grass – ‘a harp of voices telling stories.’ This story tells of Dollyheart, a sweet-natured spinster with a secret receipe for an elixir cure, and her demanding sister, Verena, who is determined to exploit the recipe for her own purposes. When tensions rise, Dollyheart leaves her sister’s house with their orphaned teenage nephew and black housekeeper in tow to take up residence in a tree house. It isn’t long before other outcasts join their extended family including the revivalist Babylove and the children who comprise her Miracle Show, and the dearly eccentric Judge Cool. The deep emotional currents of these shifting relationships lead to an uplifting, compelling reconciliation. THE GRASS HARP is a Broadway cult favorite and anyone who has experienced its emotional tug and exhilarating score easily understands why.