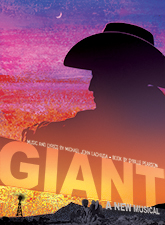 Based on the classic novel by Pulitzer Prize-winning author Edna Ferber, GIANT is a new American musical that spans generations in an epic chronicle of the state that’s like no place else on earth: Texas. Amid a turbulent culture of greed, bigotry and money, a powerful cattleman, his new East Coast bride, their family and friends – not to mention their enemies – embrace and confront the joys and sorrows that loom as large as the state they call home. With a book by Tony-nominated book writer Sybille Pearson music and lyrics by Michael John LaChiusa (the five-time Tony-nominated composer of THE WILD PARTY and MARIE CHRISTINE), GIANT received rave reviews for its off-Broadway production at the Public Theatre and 9 Drama Desk Award nominations including Outstanding Musical, Music, Lyrics, Book and Orchestrations. (Running time: 3 hours 15 minutes including one intermission)