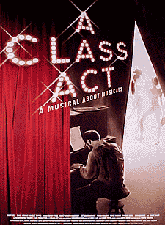 AThe Tony Award winning lyricist of A CHORUS LINE was hell-bent on writing both the words and music for a Broadway show, a goal unrealized in 1987 when he died of cancer at the age of 48. Only posthumously would Ed’s songs garner the acclaim they always deserved, in the biographical musical A CLASS ACT.
Ed got his start in the BMI Musical Theater Workshop where he largely amasses the charismatic songbook that has been arranged in A CLASS ACT to dramatize Ed’s often hilarious, ultimately heartbreaking journey. An ensemble of 7 inhabit the colorful gallery of friends and loved ones in Ed’s life including the legendarily acerbic Lehman Engle, the relentlessly peppy Marvin Hamlisch, and Über-creative Michael Bennett. Fourteen years after his death, one of the theater’s unsung champions finally got the recognition he always deserved in this vibrant musical about musicals.

COMMENTS
Doubling is used for all characters except the roles of Ed Kleban, Lehman Engel and Sophie.