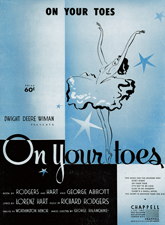 Gangsters, vaudeville and the Russian Ballet come together in this riotous, romantic romp. Junior’s folks pull him from the family’s vaudeville act and pack him off to school where he becomes a music teacher. He meets Sydney, a composer, and Frankie, a coed who’s fallen hard for him, and together they set about trying to sell Sydney’s new jazz ballet to a Russian ballet company. The prima ballerina wants to teach Junior more than a few new steps, but with her assistance, ‘Slaughter On Tenth Avenue’ is produced with Junior dancing the lead. In one of the funniest set pieces ever devised, Junior dances the premiere while being shot at from the audience by thugs who’ve mistaken him for a dancer who owes on a gambling debt. This landmark musical was directed by the legendary George Abbott and choreographed by newcomer George Balanchine, whose use of ballet here marked the first time in musical comedy that dance was a direct proponent of the plot.