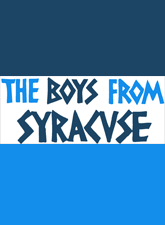 The Boys from Syracuse

Twins! More twins! Women-chased and chaste! The first musical ever adapted from Shakespeare remains the most madcap musical farce ever to animate the stage. Antipholus and his wily servant, Dromio, travel to Ephesus in search of their respective twins, from whom they were separated in a shipwreck. Naturally, they are immediately taken for their brothers and we’re off and running on a riotous chase from marketplace to marital bed. Perplexed wives, disgruntled courtesans, outraged constables and an audience roaring with laughter are left in its wake before this show’s tangled web is unraveled, and Rodgers & Hart & Abbott have triumphed once again!