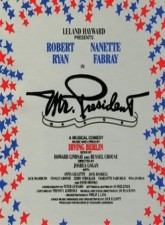 For his final Broadway score, Irving Berlin went straight to the top-the exalted office of President of the United States-to evoke the humanity within the First Family. President Stephen Decatur Henderson is en route to Russia when the proposed Soviet tour is canceled. Although a breach of protocol, he determines to land in Moscow nonetheless and the resulting humiliation costs him re-election. While his wife and two children are grateful to return home, the former President is not. He yearns to return to political life but when the offer of a Senate seat comes with compromising conditions attached, he turns it down. His love of country is primary though, and eventually he proudly returns to government at the behest of the new president.