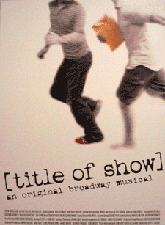 Jeff and Hunter, two struggling writers, hear about a new musical theatre festival. However, the deadline for submissions is a mere three weeks away. With nothing to lose, the pair decides to try to create something new with the help of their friends Susan, Heidi and Larry on the eighty-eights.

[title of show]—taken from the space on the festival’s application form which asks for the [title of show]—follows Hunter and Jeff and their friends on their journey through the gauntlet of creative self-expression. In the span of 90 minutes they write and perform their show at the festival and learn lessons about themselves as people, friends and artists.

[title of show] is, above all, a love letter to the musical theatre—a uniquely American art form—and to the joy of collaboration. The musical received a Tony Award® nomination for Best Book of a Musical in 2009.

*The production pianist appears onstage at the keyboard throughout the entire performance. He is referred to as ?Larry.? If it is a female pianist, then ?Mary.?