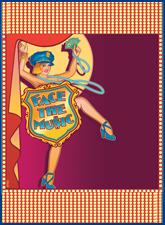 Originally presented on Broadway by the legendary Sam Harris, FACE THE MUSIC opened at the New Amsterdam Theater on February 17, 1932, and ran for 165 performances, before touring and then returning to Broadway’s Forty-Fourth Street Theater. Sharply satirical, its humor both timely and timeless, FACE THE MUSIC combined a piquant Moss Hart script with a superlative Irving Berlin score that featured such soon-to-be standards as “Let’s Have Another Cup Of Coffee,” “Soft Lights And Sweet Music,” the ground-breaking “Manhattan Madness,” and the utterly unique “I Say Its Spinach (And The Hell With It).”

After lying dormant for nearly seven decades, FACE THE MUSIC was lovingly and painstakingly restored by a team of musical archivists led by R&H Director of Music Bruce Pomahac. With an adaptation by David Ives, direction by John Rando and choreography by Randy Skinner, FACE THE MUSIC proved to be the discovery of the 14th season of City Center’s Encores!: Great American Musicals in Concert.

ENSEMBLE
A singing, dancing ensemble with many small roles.