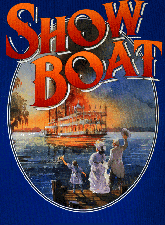 Since its premiere in 1927, SHOW BOAT has never stopped moving. For over seven decades this seminal musical has continued to evolve on a journey that has reflected the ongoing development of the lyric theater, confirming its status as the pivotal work bridging operetta and contemporary musical theater. After three film versions, numerous Broadway and London revivals, countless tours and recordings, legendary director Harold Prince took the helm for a new Broadway production in 1994 that instantly became the blockbuster hit of the season. With Oscar Hammerstein’s eldest son William serving as advisor, Prince studied all previous versions of SHOW BOAT and, with the celebrated choreographer Susan Stroman, developed a version of the classic that was hailed as a triumph by critics and audiences alike. This epic musical spans 40 years in the lives of three generations of show folk, following theirs loves and heartbreaks, their ambitions and disappointments along the Mississippi River and in Chicago.

ENSEMBLE
African-American and Caucasian Singing-Dancing Ensembles consisting of Stevedores, their Gals, Children, Townspeople along the Mississippi, and City Folk in Chicago