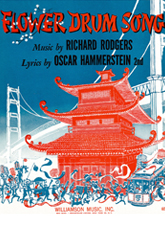 The generation gap is given the Rodgers & Hammerstein treatment in this colorful approach to the age-old conflict. In San Francisco’s Chinatown of the late ’50s, nightclub owner Sammy Fong’s traditional family has ordered him a picture-bride from China, hoping to end his pursuit of an enticing dancer. Mei Li arrives, shy and at sea in a world she doesn’t understand, and it’s clear that she’s the wrong gal for the totally assimilated Sammy. However, she may be just the ticket for Sammy’s buddy, whose traditionalist father is fighting a losing battle with his kids against rock `n’ roll, baseball, sports cars and the typical trappings of the modern American life-style. By turns raucous and heartfelt, the solution to this delightful Chinese puzzle of properly matching the young people while reconciling the old is a celebration of American ingenuity.