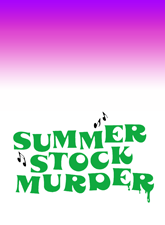 This riotous musical mystery’s three acts span three weeks at the Sagautasac Playhouse, a typical summer stock theatre. The company rehearses and presents a new musical in each act-a Friml-esque operetta, a Cole Porter-ish potpourri and a musical drama a la Sondheim. With the pressure on and temperaments soaring, a string of bizarre murders begins taking place. Accompanying this high drama of the hilarious sort is the low comedy of visiting stars and sex-crazed apprentices as crisis after crisis threatens each curtain. In a stroke of comic inspiration, one woman plays each of the visiting guest stars who arrive in each act-an ex-diva cum game show panelist, a B-movie sexpot, and a boozing broad from Broadway- making it a tour de force for a lucky singing actress. If the time has come to give your audience one they haven’t seen, this is it!