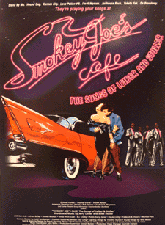 Smokey Joe’s Cafe – The Songs of Leiber and Stoller

Leiber and Stoller, as much as anyone, virtually invented rock ‘n’ roll, and now their songs provide the basis for an electrifying entertainment that illuminates a golden age of American culture. In an idealized ’50’s setting, the classic themes of love won, lost and imagined blend with hilarious set-pieces and slice-of-life emotions. Featuring nearly 40 of the greatest songs ever recorded, SMOKEY JOE’S CAFE isn’t just great pop music – it’s compelling musical theatre.

CHARACTERS
Ken - the smoothie who, along with Victor, Adrian, and Fred, makes up a quartet modeled on The Drifters
Adrian - the slow one of the quartet
Frederick - the implacable bass of the quartet
Victor - the preening bad-boy who gets most of the comedy
Michael - genuinely suave and impressive, evokes the memory of Elvis
Brenda - a combination of savvy, wit, brains and beauty
B.J. - inspired by the titanic rhythm and blues shouter Big Mama Thornton
Pattie - the throaty voice of experience
DeLee - suggests the innocence of teenage girls, but with a wild streak