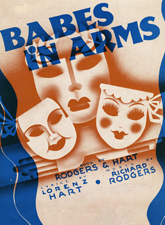 The 1937 version of Rodgers & Hart’s BABES IN ARMS is the quintessential ‘Hey, kids, let’s put on a show!’ musical, boasting one of the greatest scores ever written. A group of teenagers are left without adult supervision when their folks hit the vaudeville summer circuit, and the local sheriff is determined to send the loafers to a work farm. But the determined kids talk the sheriff into a two-week reprieve, just enough time to produce their own show and prove their mettle. The son of a wealthy Southerner agrees to bankroll the production but only on the condition that the two black kids (roles created by the legendary Nicholas Brothers) not appear in the show. The other kids are outraged, but of course the show must go on and does, in a succession of comeuppance, reconciliation and romance. The old-fashioned virtues of a 30’s musical comedy are peppered with socio-political issues which have remained resonant for more than six decades, and which later became the hallmark of Rodgers’ collaboration with Hammerstein. But it’s the sophisticated jocularity that make his musicals with Hart utterly unique, propelling these talented teens in their onward march toward self-discovery.

The 1959 adaptation by George Oppenheimer is also available. Please specify which version you would like when ordering.