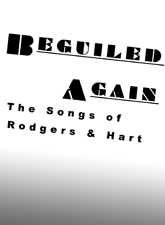 The remarkable partnership of composer Richard Rodgers and lyricist Lorenz Hart spanned twenty-four years, resulting in the scores for thirty stage musicals and nine films. While their songs are acknowledged as among the most sophisticated and witty of their time, they could also be stunning in their simplicity and directness. BEGUILED AGAIN illuminates the astonishing breadth of their output with a musical menu offering nearly fifty selections from the incomparable Rodgers and Hart songbook. This cleverly compiled potpourri juxtaposes the urbane and the melancholy, the sardonic and the romantic, providing ever-changing and contrasting emotional journeys that give this revue real momentum. There is no linear plot or ‘and then they wrote’ narrative. Rather, the songs are grouped thematically in ways that allow them to tell their own stories and reveal their splendor in the process. Variety and vigor have always been the Rodgers and Hart hallmarks. Perhaps their illustrious compeer, Irving Berlin (who also knew a thing or two about songwriting) summed it up best with his famous maxim: ‘Tuneful and tasty, schmaltzy and smart – music by Rodgers, lyrics by Hart.’

ENSEMBLE
While the original production was presented with a cast of only six, a singing-dancing ensemble as large as desired can easily be incorporated.

COMMENTS
The characters are identified in the script and the score by the names of the actors who created the roles. For the purposes of your production, you may want to identify them by the names of your actors.