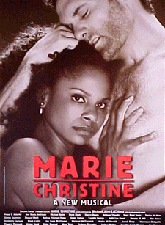 This powerful re-telling of the tragic Medea myth was hailed by the San Francisco Examiner as ‘A major work by one of the most highly regarded new serious songwriters for the stage.’ Set in the twilight years of the 19th century, MARIE CHRISTINE chronicles its doomed heroine’s journey from her genteel life of privilege in New Orleans Creole society through betrayal and incomprehensible vengeance in boisterous Chicago. This gripping tale of one headstrong and passionate young woman’s all-consuming love for an ambitious sea captain provides a tour-de-force for its leading lady. When it premiered at the esteemed Lincoln Center Theatre, the New York Daily News found it to be ‘A brilliant re-working of Medea [that] manages at once to make it fresh and to retain its gut-wrenching compulsion.’ MARIE CHRISTINE was the final Broadway musical of the 20th century, an extraordinary creation that investigates unsettling mysteries of the psyche that are as old as the human condition itself.