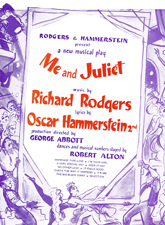 Rodgers & Hammerstein’s valentine to the theatre takes place both onstage and backstage during the production of a musical entitled-what else?-‘Me and Juliet.’ This show-within-a-show follows the romance between a chorus girl and an assistant stage manager leading to their secret marriage. Their happy union is threatened by the electrician who still carries a torch for the girl and, in a drunken rage, tries to kill them both. A contrasting romance involves the stage manager, whose credo never to fall for a girl in a show he’s working on is complicated when a dancer he’s been wooing is suddenly thrown into the cast of ‘Me and Juliet.’ Informed by rich insights into the world of Broadway-how jobs are gotten and lost, the inside tricks of the trade and the pitfalls of backstage romances-ME AND JULIET is an innovative, irresistible show that consistently delivers both musically and dramatically.